Can You Eat Raw Hot Dogs? 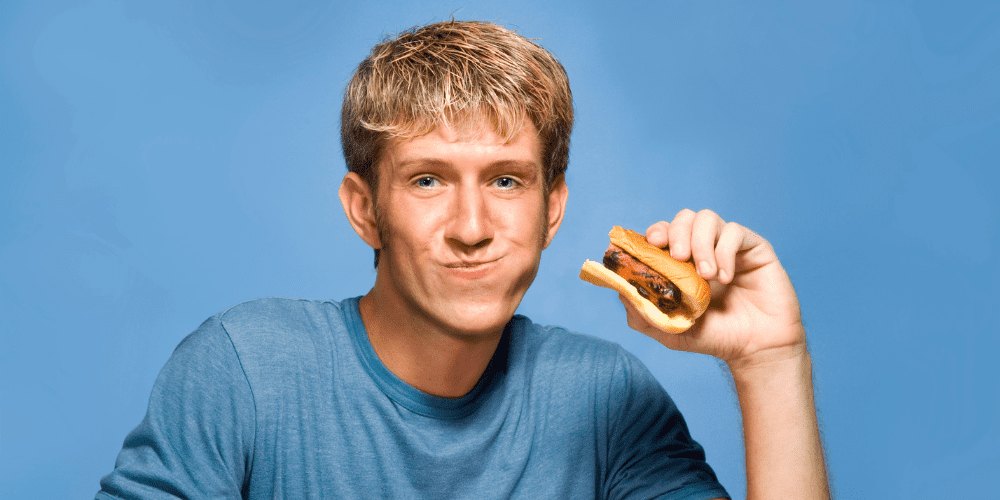 Hot dogs are pre-cooked, vacuum sealed, and safely stored in cooled-down conditions immediately after being produced. Knowing all of that, can you eat raw hot dogs without getting sick?

You can eat raw hot dogs more safely than you could say, eating raw meats that have not been previously cooked. However, there is a chance that unprepared hot dogs can contain an anaerobic bacteria called Listeria monocytogenes (which causes an infection called Listeriosis), which normally cook off through heating.

How are Hot Dogs Pre-Cooked? After being thrown together and placed in their casings, hot dogs are pre-cooked and moved to a smokehouse local to the plant producing the hot dogs. Through the utilization of controlled temperatures and other conditions, the hot dogs are completely cooked through.

Smoking processes can also involve flavoring (using different types of wood to add the desired taste) and often takes longer to cook than other heat sources. In most circumstances, they take roughly an hour to cook via smoking.

What is Listeria Monocytogenes? Listeria monocytogenes is a form of bacteria (pathogenic bacteria, to be more precise). This bacterium can live in soils, water, dust, animal feces, and decaying vegetation.

Primarily, the bacteria can thrive in any moist environment, and it can also survive refrigeration and other forms of food preservation.

Listeria Monocytogenes are most often found among cattle, sheep, and goats but can also become a problem with household pets such as dogs, cats, rabbits, pigs, etc.

With an average, healthy person, this bacterium might cause food poisoning leading to diarrhea and an upset stomach. For most people, it’s done and over with after a day or two.

However, there are rare occurrences that it doesn’t go away and become the main cause of an infection in your system called Listeriosis. Listeriosis is a direct consequence of digesting foods contaminated with the bacteria Listeria Monocytogenes. Above are the symptoms of dealing with the bacteria flowing through your digestive system till it is gone- a brief dose of food poisoning, then back to normal.

But for some, it doesn’t go away and reroutes itself from the digestive system into other areas creating Listeriosis. When this happens, the brain, bloodstream, or even spinal cord membranes can become infected with this disease.

Symptoms can begin as far out as two months after eating foods (in this case, uncooked hot dogs) that harbor Listeria Monocytogenes. Often it starts coming across as mild flu but can also be accompanied by other symptoms. A stiff neck, loss of balance, headaches, confusion, convulsions, and a variety of muscle aches can co-occur with the flu symptoms. An overwhelming majority of people who contract Listeriosis are hospitalized (about 90 percent).

Listeriosis though rare is much more serious than other causes of food poisoning and has proven deadly. Unfortunately, despite using a combination of antibiotics to treat those with this disease, the mortality rate remains about 20 to 30 percent of people who suffer extreme cases.

The very young, the very old, and those with compromised immune systems most commonly die due to this disease.

The idea that something as simple as heating a hotdog before eating it could avoid these issues is mind-boggling. No representative from any hotdog manufacturer will suggest eating a hotdog in the raw, despite the rarity of this disease, the quality control methods being used, or the fact that the hotdogs are pre-cooked.

What other foods can contain Listeria Monocytogenes? Listeria Monocytogenes are not limited to cold hotdogs. Other foods can harbor these bacteria as well, such as: People who are already prone to be at risk of developing this infection are often those who tend to have a tough time fighting off diseases in the first place. They are:

1. Newborns– I’m not sure who’s giving a newborn baby hot dogs in the first place, but if it exists in the list of who shouldn’t be eating raw hot dogs, it must happen. The baby suffers the most serious consequences, not just mild symptoms when it does.

2. Those with compromised immune systems– People with immune systems that work properly but are being divided by other problems such as cancer, cancer treatment, diabetes, or other diseases (kidney disease, for example).

3. Pregnant Women– Pregnant women are over 20 times more likely to contract Listeriosis, which can result in miscarriage, stillbirths, or premature birth. The disease is passed from mother to child in the womb.

4. Elderly– Over half of the cases involving Listeriosis are suffered by the elderly. The older you get, the more weakened the immune system becomes, opening you up to threats that would have otherwise not become a problem while younger.

5. Anyone who currently takes particular types of medication– Some medications can compromise one’s immune system and even promote the passage of this disease into the body rather than in and out of the digestive system.

6. People suffering from AIDS– Acquired Immune Deficiency Syndrome speaks for themselves in terms of why it is so dangerous for someone with AIDS to eat raw hotdogs.

According to the USDA, it is very uncommon for healthy people to contract Listeria from eating raw hotdogs or other foods that could develop the bacteria. Uncommon, however, is a lot different than never. Sure, popping open the fridge and grabbing a quick bite of a raw hot dog is convenient and fast, and if you can get past the cold, it doesn’t taste too much different at all.

But is sparing yourself the minute or two it would take to toss it in the microwave worth the risk simply? Such a simple thing can avoid such a basket of health concerns- for some, even death!

So yes, you can eat raw hotdogs and take your chances due to the rarity of bacterial contamination found in them, but no, you still shouldn’t do it, especially if you have the means of heating them.