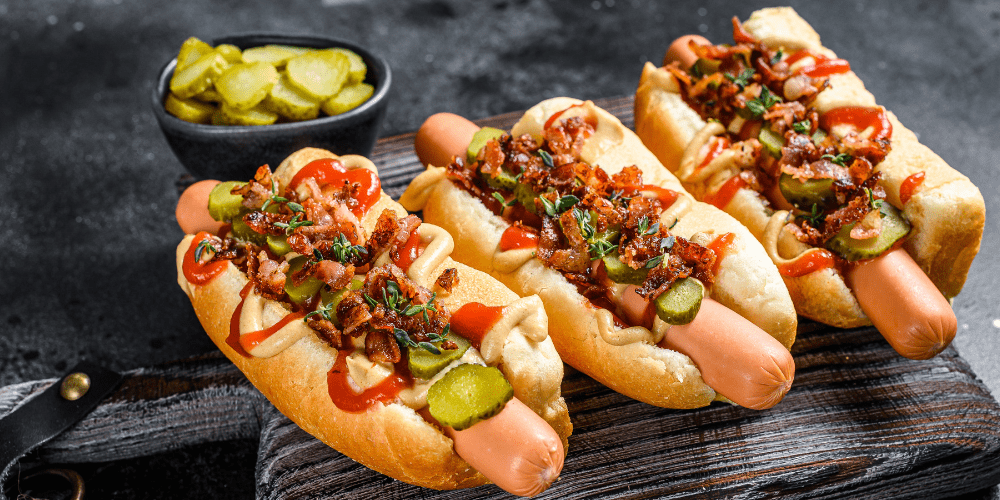 Muslim law covers a lot of ground for believers, including eating habits and what’s acceptable or unacceptable to eat. Certain food types are considered halal when deemed acceptable, but are hotdogs halal?

Hot dogs can be halal but can also be haram (forbidden). There are several types of hot dogs out there made by different brands. Though the overall method of making a hotdog isn’t the issue, problems enter with ingredients. Hot dogs made from chicken, beef, or lamb are halal.

There are halal-approved hot dogs, but they are often renamed as the “dog” part is considered misleading. The hot dog is not made from dogs. The “dog” in “hot dog” is often replaced with the word “sausage.”

“Halal” is an Arabic word that means permitted, lawful, or what’s allowed. Muslims use it to refer to what’s allowed under the laws of Islam.

Halal things are not limited to foods or animal slaughtering processes. What is or is not halal covers every area of one’s life, following Islamic law.

What are Halal Rules?

Though halal in the Muslim world touches every area of life, there is a certain emphasis on food. When it comes to halal foods, two areas tend to matter the most. Whether or not particular animals are approved and if the production process is approved.

Foods that bear being halal are: According to the Codex Alimentarius Commission, all sources of food are lawful except for those that are deemed to be haram. What that means is that there are too many halal foods to list specifically, and those that are haram are better listed.

Most seafood, beef, lamb, chicken, and most fruits and vegetables are deemed halal so long as the extra conditions remain true (processing and such 100% away from any chance of cross-contamination or touching what’s deemed unacceptable).

One thing to note is that the more complex the food becomes, the tougher it is to stay within the halal guidelines. Trying to figure out whether or not it contains ingredients that are not only strictly halal but haven’t been processed in an un-halal manner can get dicey for Muslims who live in territories that could be considered non-Muslim.

Think of a dish that contains 8 to 10 ingredients, for example. Every ingredient must adhere to the halal guidelines because even one that doesn’t comply could wipe out the rest of the dish.

Surely one’s dedication to the letter of the law would determine how much this would affect someone out to eat at a restaurant in Boston, for example. Where some may avoid the chance of crossing that barrier, others, perhaps more moderate to the faith, might turn a blind eye and hope for the best to enjoy their meal.

Is Halal Similar to Kosher? Oddly enough, halal practices in the Muslim world share more similarities than differences when compared to the kosher food standards of the Jewish world. Both share many prejudices toward the same animals regarding what not to eat and have criteria for slaughter (albeit different criteria).

Halal standards part ways from those of kosher after you get past the similarities and continue into different things, such as fruits, vegetables, and drinks, to stay away from. In short, alcoholic beverages and anything that has to do with them are forbidden unless the alcohol can be cooked out, then it can be consumed.

Yes, there are differences in particulars. For example, the list of unacceptable animals that can be eaten varies between the two, and so on.

Both, however, share the same idea and attempt to drive home the same point from a combination of health, obedience, and philosophical points of view.

By the way, the most popular Kosher sausage is the Hebrew National Hot Dogs. Whether in Chicago or elsewhere, you can get halal or Kosher-approved hot dogs at a wholesale price at Costco near you.

What are Haram Foods? Haram foods are those that have been deemed to be unclean or unacceptable. They are completely forbidden according to Islamic law.

Anything that still contains blood after being prepared to eat is considered haram, even if it would otherwise be viewed as halal. Any meats or derivatives from or what is made of pig or boar meat are completely harams.

Alcoholic beverages or any other form of intoxicants, some shellfish, any animal dedicated to anyone other than Allah, and foods that don’t meet the slaughter, storage, and production guidelines are all deemed haram in the eyes of Islamic law. Hot dogs have shown to be rather controversial in a couple of countries in terms of whether or not they can bear the halal label. Oddly enough, the ingredients have little to nothing to do with why that is!

It’s the name that has soured officials to warm up to the hot dog because it has the potential to lead one to believe that there’s a dog as part of the ingredient. To be clear, officials know what a hot dog is made from.

But because the name represents an animal that is haram to eat rather than halal, they’re hesitant to accept the hot dog “as is,” requiring a name change to avoid confusion. Some Muslims couldn’t care less about this, others were offended at the thought of officials thinking them dumb enough to think that there’s dog meat in a hot dog.

This took place in Malaysia and launched a controversy over Twitter. But in the end, are hotdogs halal?

Yes, they are when made specifically to satisfy halal standards. This is true regardless of being called hot dogs or pretzel sausages.